1968 was a time of global intensity; mores and values were changing, driving social unrest. 1968 marked the significant increase in American deaths from the Vietnam war. It also marked the date of student protests in France that were considered a cultural, social and moral turning point in the history of that country, and 1968 marked an equally intense protest at Columbia University. It was the year of the My Lai massacre and the death of Martin Luther King, Jr.

I wonder what was going through my father’s mind the following year as he made the decision and the requisite following choices to move his family out of America and into the world of third-world countries and extensive travel in the South Pacific and Asia. As he retired from his thirty-year career at the Washington State Department of Game and maneuvered us to live his boyhood dream of traveling, did he think about Vietnam raging out of control? 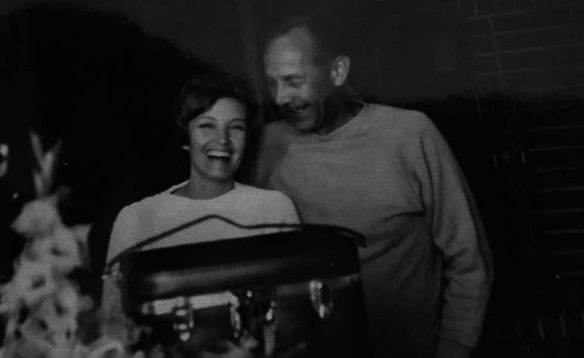 My parents with one of the brown suitcases gifted to my dad by his colleagues on his retirement, so happy and in love.

I realize now how I’ve lived much of my life in the same way–going without consideration of what’s to come, valuing experience and the journey over the outcome or the destination. I pause—how are those two things connected…my father’s choice to take us out of the country at such a tumultuous time and my lose-the-map way of living? Is there a connection? Or, might I just be supplanting perspective on my memory of him and my fascination with that time?

We left the States in September of 1969. My dad’s new job was on the island of Saipan, in the Marianas Islands, in Micronesia. A small island, just fourteen miles long and five miles wide. The Battle of Saipan was a major offensive of WW II, featuring the Allied troops against the Japanese. Another historical tidbit–one theory on the disappearance of Amelia Earhart is that once her plane was downed, she was held hostage by the Japanese in a Saipanese jail. Saipan is part of the Marianas Island chain which sit along the Marianas Trench, the deepest part of the Earth’s oceans.

I was six, a few days from turning seven. My sister was four, just weeks from turning five. I remember the leaving. In my little girl mind I was unaware of all the steps—my parents leaving their jobs, the packing, the selling of house and cars, garnering of passports, inoculations, the intricate decisions  about what to take and what to leave behind. We left our dogs. We left my pet bunny. We left our house by the lake.

The night before we flew out, we stayed at grandma and grandpa’s. I asked my grandma to come with us, a simple child’s request. At four in the morning my sister and I were awakened, and left the twin beds in that room we’d napped in so many days of our childhood. The beds with the polyester flowered comforters, one pink and one yellow, the colors we’d fight over in choosing a bed.

Grandpa and me, Rachel and Grandma, a few months before we left for Saipan.

My parents had traveled to Hawaii the year before, something neither my sister or I was aware of until we found the slides, Kodachrome images of mom and dad as tourists, iconic in their 60s garb and naiveté as travelers, holding up pineapples, wearing leis. When Rachel and I saw those images, we realized just how green our parents were at travel that morning we left behind the warmth of grandma’s. As we left the States, we stopped over in Honolulu before catching our flight to Saipan. In Hawaii, Rachel and I stayed in a hotel for the first time. We swam in a hotel pool and the ocean for the first time.

Hotel pools were to become the mark by which my sister and I judged the fun factor of each of many long trips to places like Bangkok, Australia, Indonesia, India, Saigon. Hotel pools were where we formed our bond as the world got bigger and bigger and we knew we had to stick together.

In Honolulu we shopped at the Ala Moana Center, then a new mall, visited the Polynesian Cultural Center and Pearl Harbor. In a sense, that first trip was a rite of passage to our new identities as world travelers, as little girls who would come to know that most cultural practices were wildly different than our world of Olympia, Washington.

Flying from Hawaii to Saipan was a journey from the first world to a pin-dot on the globe in the middle of the vast Pacific Ocean. Because of Micronesia’s remoteness, our flight stopped at little islands along the way to drop supplies. When the plane landed on Saipan, a fire truck raced it down the runway, just in case. The airport was barely more than a cement hut. Over time, we’d come to love the empanadas sold at a stand there, full of spicy, greasy meat that dripped onto our hands with each bite.

The first night on Saipan is forever etched in my mind. I can’t find the adjective for the sum total of the experience, but I remember the scene. Rachel and I were beyond tired. Our parents were tired. Collectively, we were clearly out of our element, and even at six I got this. We stayed at The Hotel Hafa A’dai. The hotel’s name means good day in Chamarro, the mixed language of the islands. The hotel was the best on the island, yet we were unseasoned travelers and didn’t know what that really meant. Our room had that musty smell I now know is inescapable anywhere in the tropics, a smell I now equate with longing and nostalgia and truth. There were geckos on the ceiling, they chirped all night, and my mother was scared of them. The air conditioner was loud and erratic, also a now beloved common feature of tropical hotels the world over. It seemed dark and dingy in the room, and our parents worked to smooth over the rough edges so that we could fall asleep in one of the double beds. Our new life awaited in the morning. 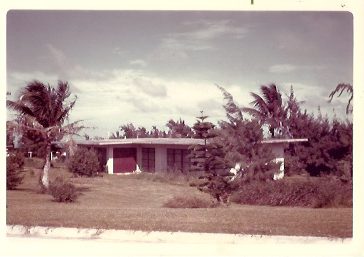 Our house on Saipan, on Capital Hill.

During the four years we lived on Saipan, we went to the Hafa A’dai often, for dinner, to entertain visiting colleagues of my dad’s, or just so our parents could socialize while the kids swam in the pool. Music played from the bar, and our parents would linger while my sister and I went to the gift shop for Cadbury chocolate bars.

I don’t know what my dad intended, but I do know that traveling and living overseas during that world-gone-crazy time of the late 1960s and early 1970s shaped my world view. Maybe those experiences are what allow me to cope in these similarly chaotic times. I know they shaped my persistent belief that there are only two types of people in the world, regardless of social norms, politics, race, gender, creed, or culture–there are those who love and those who hate. 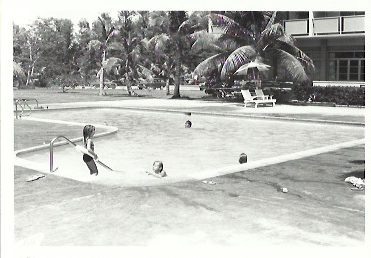 The swimming pool at the Hotel Hafa A’dai.

Sometimes, I dream of that first night on Saipan. Often, I dream of the Hafa A’dai pool and the beach just beyond its edges. I think I travel in my sleep to that innocent time, when my parents were alive and happy, to try to get back to whatever part of my soul is still there, listening to the geckos.